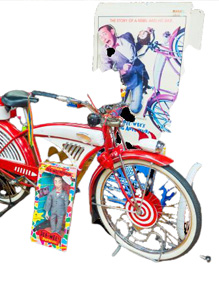 Whilst tidying up my shed looking for holiday decorations, I came across an old box containing some VHS tapes, one of them in particular sparking a fond nostalgia from when I was a kid – Pee-wee’s Big Adventure. Any Gen Xer or Millennial knows the coolest kids on the block had playhouses, and I don’t mean the fancy pre-made versions children have today. I’m talking about the rickety wooden playhouses made out of salvaged pieces from alleyways and parents’ backyards where you would most likely need a Tetanus shot if you fell inside, and one of the greatest discoveries when exploring neighbourhoods and their parks was a mysterious wooden playhouse tucked behind a group of trees; mission Secret Base Take Over: Activated. With all of these great memories once again coming to life, I decided to do a deep dive into Pee-wee’s Playhouse and find some interesting tidbits I never knew as a kid. That said, let’s take a walk down memory lane with some fun facts about Pee-wee’s Playhouse!

Pee-wee Herman Played as “Himself”

One of my favourite things about Pee-wee Herman was his anonymity as an actor. Whenever the public saw him out and about, it had always been Pee-wee, not Paul Reubens. The real man behind a famous character could easily become another face in the crowd despite the fame Pee-wee had. Keeping the magic of Pee-wee alive for children, all of his interviews and public appearances such as award ceremonies were always in character, and even his credits on Pee-wee’s Playhouse had listed him as the character, not the actor. To keep up his image of the real life kooky person named Pee-wee in interviews, Reubens would portray the character as a stand-up comedian who was growing his career by acting as himself. The best part? Pee-wee Herman is the named actor of a star on the Hollywood Walk of Fame, not Paul Reubens! That’s definitely taking the line between character and actor to an extreme and in a pleasant way!

How Many “Before They Were Famous” People Can You Find?

Phil Hartman, whose star really began to rise with Saturday Night Live, played as the sea faring Captain Carl; while the character was a bit gruff, he had a soft spot for Pee-wee and played along with Pee-wee’s childish antics. The goofy and lovable Cowboy Curtis was played by Laurence Fishburne, but to his credit he did begin as a child actor years before Pee-wee’s Playhouse. One of the three creators of “The Playhouse Gang”, Opal, was played by Natasha Lyonne who is most famous for her role in Orange Is The New Black. Musical talents Dweezil Zappa wrote the music for the Pee-wee episode “Reba Eats and and Pterri Runs”, Danny Elfman composed for the episodes “Monster”, “Cowboy and Cowntess”, “The Gang’s All Here”, “Pee-wee’s Store”, and “Pee-wee Catches a Cold”, and Devo band member Mark Mothersbaugh also had his hand in scoring some episodes for the quirky children’s show. 1970’s actor William Marshall played as the King of Cartoons. The L.A. Law star Jimmy Smits briefly played the repairman for Conky the Magic Screen, and another legal drama actor famous for her role in Law & Order is Reba the Mail Lady, or better known as S. Epatha Merkerson. Pee-wee’s Playhouse helped usher in the career of the talented John Singleton who wrote and directed Boyz N The Hood.

Pee-wee’s Playhouse Was Actually Kind of Made From Metal

For those familiar with heavy metal music or horror movies, it may come as a surprise to learn the legendary Rob Zombie worked on Pee-wee’s Playhouse in his early years before reaching stardom. Despite being one of the founders of the band White Zombie and making his movie direction debut with “House of 1000 Corpses” in 2003, he was a production assistant for Pee-wee’s Playhouse after he had first moved to Los Angeles, California at the age of 19.

The Theme Song Has a Familiar Voice

When I was a kid, I had always thought the singer for Pee-wee’s Playhouse theme song had been Betty Boop (voiced by both Margie Hines and Mae Questel). Much to my surprise, the voice behind the eccentric show’s opening theme song had actually been the incredible Cyndi Lauper! Most of us know that Girls Just Want to Have Fun and that’s exactly what Lauper had done for a majority of her career, but during the time Pee-wee’s Playhouse had been created, she had recently released the song “True colours” which had a much more serious theme. Due to Lauper’s belief our society in that time period wouldn’t be able to accept both a quirky and up-beat song alongside one with much deeper meaning, she chose to use the pseudonym of Ellen Shaw (the actual name of one of her backup singers at the time) to conceal her true identity.

Raised From The Ground Up

The character of Pee-wee Herman was born in 1977 within the Los Angeles, California-based improv comedy group known as The Groundlings. Comedians were asked to create a character someone could see in a comedy club, and due to Paul Reubens having a difficult time remembering punchlines to jokes, thought up a character that would sink in the comedy industry. People loved Pee-wee and his sassy, childish nature, so the character idea stuck and shortly afterward shot straight for the stars.

That Time Pee-wee Got Arrested

No, it’s not what you’re thinking! Before settling down into his very own wooden playhouse with quirky friends, Pee-wee Herman’s movie debut was seen in Cheech & Chong’s Next Movie as a rude hotel desk clerk who is later arrested as he had been mistaken for someone else. This is definitely a darker side of Pee-wee, and while the majority remembers him as a bubbly and childish character, no one really recalls his dark start or dance with illegal substances.

CBS first approached Paul Reubens with the idea of a cartoon version of Pee-wee Herman. However, Reubens had been a long time fan of shows such as The Howdy Doody Show and Captain Kangaroo (Bob Keeshan, the man who played as the character Captain Kangaroo, later reviewed one of the show’s video releases and proclaimed Paul Reubens as an “absolute genius”), and presented his child-friendly counter idea. With the strong influence of classic live action shows and the green light from CBS, Pee-wee’s Playhouse came alive on t.v.’s every Saturday morning beginning in 1986.

What better way to test the realism of a character than to put them in a real life situation like a popular dating game? In 1979, Pee-wee made his debut on-screen through the show “The Dating Game” where a lucky bachelor or bachelorette questions three contestants vying for a date. Pee-wee Herman showed up in character to the cattle calls and supposedly appeared in three episodes, one of which he actually won. I wonder if he picked his date up on his red Schwinn bike?

One of the best parts about children’s shows as a kid is the interactivity. It really made you feel like part of an imaginary world, and even though it was on the other side of a t.v. Screen, it was very much a real thing when you were actually involved and helping. Much to the delight of children, and not to adults anywhere within vocal range, screaming over the Secret Word in every episode had been so much fun! Parents around the United States would wince as children screamed their loudest anytime a character on Pee-wee’s Playhouse uttered the Secret Word of the day. It was usually Conky the robot who gave Pee-wee the secret word, but there were a few occasions where other characters within the Playhouse universe were given the legendary task. The final secret word for the show in its last episode, “Playhouse For Sale”, was “word”.

Pee-wee Was a Fashion Icon

The look of Pee-wee Herman is unforgettable even after all these years. His ill-fitting suit had been permanently borrowed from Gary Austin, the co-founder and director of The Groundlings, while the bow tie had been acquired from someone Reubens had known. Later on, the character of Pee-wee Herman adopted the use of red lipstick, blushed cheeks, and the chequered clothing style of children’s T.V. Host Pinky Lee. Staying true to the character, he was always seen in public wearing the legendary suit and tie.

Pee Wee is an odd name in itself, and though it may have been a popular name in the first half of the 20th century among athletes and musicians, Paul Reubens got partial inspiration for his character’s name through a little Pee Wee brand harmonica he had as well as from the surname of a quirky neighbourhood kid he knew.

One Pee-wee to Rule Them All

Something not common in the industry is having full creative control of your brain child, so for Paul Reubens he had the whole world placed in his hands when Pee-wee’s Playhouse was picked up by CBS. For it’s entire five seasons he had full creative control and mentions only receiving a handful of remarks from the higher ups in regards to what should happen, but he does say that their requests were always reasonable and he had no problem in changing it up a bit. Reubens had also worked tirelessly throughout every portion of the show; from writing, production, and acting as the show’s star, he had very little time to himself and it all eventually caught up to him, spurring the end of Pee-wee’s Playhouse in 1990. Unfortunately due to real life circumstances and an arrest in 1991, many believe the show ended because of that situation and not the actual reason being burn out. I’m happy to report that Paul Reubens and CBS parted ways on Pee-wee’s Playhouse under a mutual understanding.

Having full creative control with Paul Reubens’ self-professed perfectionism, he admits to spending a lot of his personal money into the Pee-wee’s Playhouse project. The first 3 seasons he openly claims he went way above the budget, and because of that, lost a lot of money to keep his perfect dream alive. However, he does also say that in the final 2 seasons of the show he took constructive criticism from the line producer to make sure the show successfully ran under budget.

Honestly there is a tonne of off the wall things you can find out about Pee-wee’s Playhouse, and it’s no surprise considering how wild that zany show used to be! Pee-wee is certainly cemented in history as a legend in his own right and shaping the way children would insult one another, “I know you are, but what am I?” is a great example of that. He allowed us to dream and explore while keeping his content both exciting and engaging for his young audience. Between the show itself and the handful of movies, Paul Reuben created a wonderfully kooky character that children couldn’t help but want to hang out and play with. He kept the dream alive by playing as the beloved character outside of his Playhouse setting, got us to do the Pee-wee dance while pretending to walk a tightrope, and had us screaming as loud as we could all because of a single word. I truly don’t know what my childhood would have been like without the imaginative Pee-wee’s Playhouse. What do you think? Did you have a favourite Pee-wee memory or a movie of his you couldn’t live without?