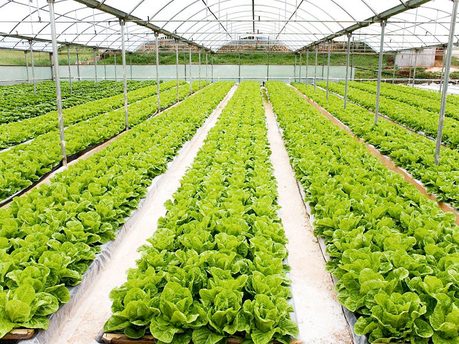 Hydroponics is the growing of plants in water without soil, treated with water with nutrients instead.

Hydroponics, simply put, is the growing of plants in water without soil. Of course, simple becomes a bit more complex, when you realize the environment that the plants are in has to be completely controlled, you have to treat the water with nutrients and oxygenate it at times, and if using one method, the plants have to be placed in an inert medium such as sand or Perlite to anchor the roots. However complex, there are many advantages to hydroponics. This type of gardening makes it possible to grow a wider variety of plants in a great number of climates and to grow plants and crops outside of their indigenous climates. Hydroponic growth is not seasonal, it allows for continual growth all year long. There are countless variations and methods used in hydroponics.

Hydroponics has a long and successful history for many cultures around the world. Howard M. Resh, in his book, Hydroponic Food Production, discusses some of these civilizations that used hydroponics down through history. “The hanging gardens of Babylon, the floating gardens of the Aztecs of Mexico and those of the Chinese are examples of ‘Hydroponic’ culture. Egyptian hieroglyphic records dating back several hundred years B.C. describe the growing of plants in water.” Some of the early horticulturists believed that a seed needed nothing but water to grow and that the soil was just to hold the plant upright as it grew. This led to many experiments of growing plants in just water with added solutions at times. In the 1620s, Sir Francis Bacon described experimenting with plants in this way.

Research in the past century has allowed horticulturists and scientists to create new hydroponic methods to deal with many issues of the plant and food industries. Down through the centuries, hydroponics has even been used in areas where the soil is not suitable or there is no soil, to provide produce for the people. In World War II hydroponics were used to grow fresh produce for soldiers stationed in non arable islands.

Today, commercial farmers are implementing hydroponics like never before. The crop yield is very advantageous over traditional soil growing: A hydroponic acre can yield 10,000 plants where an acre of dirt can produce only a third of that amount. The cost for hydroponic systems has been greatly reduced by the development of cheaper plastic and development of pumps that provide full automation. Hydroponics also eliminates the need to overuse pesticides.

Not just farmers, but people from around the globe are becoming involved in hydroponics. They are now using hydroponics to grow and supply fresh produce to friends and family. Hydroponic principles are even being taught to students in schools around the world.

Environmentally speaking, hydroponics offers several benefits. It uses considerably less water than gardening with soil, fewer pesticides are needed and this saves output of toxic substances into the air, also, with no topsoil use, topsoil erosion doesn’t happen. It is thought by some that if agriculture trends with soil gardening continue to erode the topsoil, hydroponics will be our only method of farming.

In many countries hydroponics is big business. According to Jeffrey Winerborne, author of Hydroponics Indoor Horticulture, “Approximately 90% of all cut fresh flowers purchased in the UK are hydroponically grown and an estimated 65% of all fruit and vegetables purchased from your supermarket, again are grown in hydroponics systems. So like it or not, we have all bought and eaten hydroponic produce.” With numbers like those, it would seem hydroponics is the wave of the present and the future.