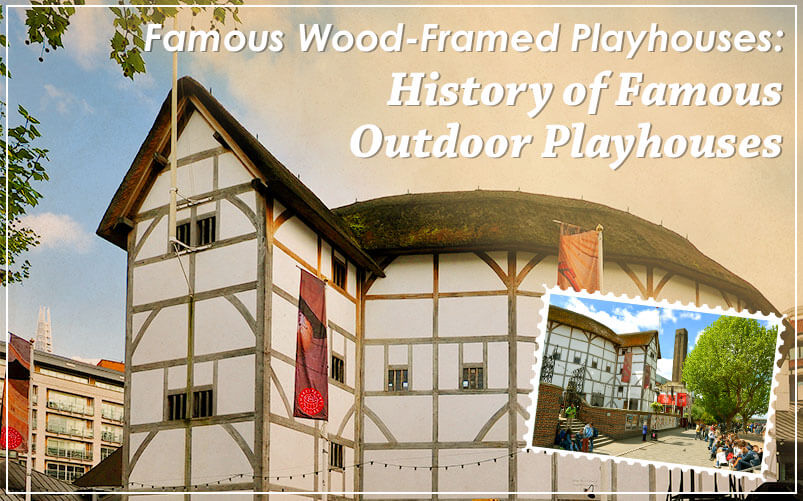 A playhouse is a common and historical Elizabethan term for a theatre, and it typically refers to those built in London in the late 16th and early 17th centuries. These venues emerged after years of actors performing in inn-yards, as theatre troupes desired a more permanent performance structure. Elizabethan playhouses combined the open-air amphitheatres of Ancient Greece and Rome with the added comfort of a closed structure, creating a private, indoor hall in which productions of William Shakespeare and other performances could be enjoyed. Following are some of the most famous playhouses found during that era.

Built in 1599, the Globe Theatre was originally constructed by William Shakespeare’s playing company – the Lord Chamberlain’s Men. It was built on land owned by Thomas Brend, and evidence suggests that it was a three-story, open-air amphitheatre that could house as many as 3,000 spectators.

The wood framed Globe Theatre went up in flames in 1613 during a performance of Henry VIII when a theatrical cannon misfired. The playhouse was rebuilt the following year, but it was closed down for good by the Puritans in 1642. Today, a modern reconstruction named “Shakespeare’s Globe” is situated about 750 feet from the site of the original theatre.

The Swan was built in 1594 by Francis Langley in Surrey. It was one of the most visually impressive of the London theatres when it existed. It was built of flint concrete with wooden supporting columns that were painted in a such way that they looked like marble. It was located within the Manor of Paris Gardens, and playgoers could arrive there by water.

This theatre was historically significant for two main reasons. First, it was here that the acting company Pembroke’s Men held The Isle of the Dogs, which resulted in the government closing all UK playhouses in 1597. Secondly, the Swan is depicted in the only known contemporary drawing of the inside of an Elizabethan playhouse.

The Fortune was a historic London theatre located between Whitecross Street and Golden Lane. It was constructed in 1600 and stood three stories high, and unlike most playhouses of the area that were octagonal or round in shape, the Fortune was rectangular. It was made of lath and plaster, with the gallery floors constructed of wood. The stage was thrust forward to the middle of the square and was 43 feet long.

The Fortune was built by Philip Henslowe in order to compete with the Globe, and it offered certain design elements that were intended to improve the working conditions of actors, including:

The Fortune was destroyed in a fire in 1621 and was rebuilt several years later, although it did not retain many of its original design elements.

The Rose was an early Elizabethan theatre, and it was the first of many playhouses to be located in Bankside, Southwark. This location was important, as it was outside the jurisdiction of London’s civic authorities. It was built in 1587 as an open-air amphitheatre, and whilst it had three tiers of galleries, it was smaller than the Globe and the Swan.

The new building was a wooden playhouse with a lath and plaster exterior and a thatch roof. It was constructed in the shape of a 14-sided polygon and served as the first purpose-built playhouse that ever staged a production of any of William Shakespeare’s plays.

The Curtain was a historic Elizabethan playhouse found in Curtain Close, Shoreditch, just outside of London. It opened in 1577, and while little is known about the plays that performed here, Henry Lanman is thought to have been the proprietor.

In terms of its construction, the Curtain theatre is thought to have been a wooden building with three tiers of galleries that surrounded a central, open yard. This outdoor playhouse allowed for low-cost ticket holders to stand in the yard in order to watch theatrical productions. Remains of the original Curtain Theatre were uncovered by archaeologists in 2011.

The Red Lion was a playhouse located in Whitechapel. Built in 1567, this theatre served as a short-lived attempt to create a purpose-built playhouse—the first known in London. This playhouse had previously been a farm, but John Reynolds constructed a single gallery theatre within the farmhouse garden. The stage was fitted with trapdoors and a fly tower for aerial stunts.

Unlike other theatres and children’s playhouses of its time, the Red Lion saw limited commercial success. The only play that is known to have been presented here was The Story of Sampson, and there is little evidence to suggest that the theatre survived beyond its summer season of 1567.

The Theatre was the second permanent playhouse built in England, although it was the first to see significant success. It was constructed by James Burbage and is thought to be the first theatre built in London for the purpose of theatrical productions. A variety of important acting troupes performed here, including Lord Chamberlain’s Men, of which William Shakespeare served as an actor and playwright.

The design of The Theatre was adapted from inn-yards, consisting of a polygonal wooden structure with three separate galleries found around an open yard. A thrust stage extended from one of the sides, and the open yard in front of it was cobbled to provide room for the audience.

The Blackfriars Theatre moved away from outdoor playhouses to create this indoor venue. It was established in 1576 specifically for the children of the Chapel Royal, and actors with the Queen’s chapel choirs used this children’s playhouse from 1576 to 1584. In 1596, the property was purchased by James Burbage and was converted into an indoor hall playhouse to be used by Lord Chamberlain’s Men.

Today there are a few notable reconstructions of the original Blackfriars, including the American Shakespeare Center’s Blackfriars Playhouse found in Staunton, Virginia. This 300-seat theatre opened in 2001 and was constructed based on the specifications known about the original playhouse.

If you are interested in learning more about historical playhouses found throughout the UK, check out some of these helpful resources: