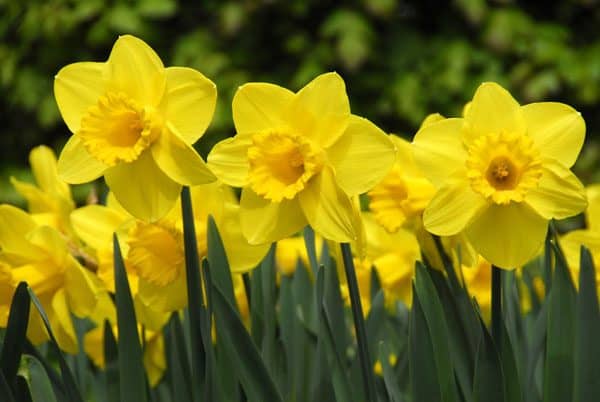 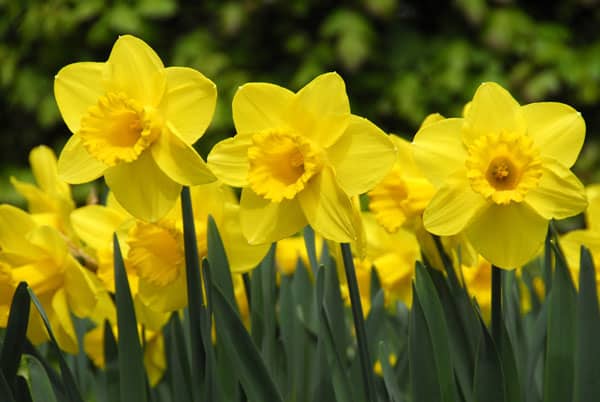 In this article, we’ve included all there is to know about Daffodils (Narcissus);

The cheerful, nodding heads of daffodils are the true harbingers of spring. Brighten up your borders, containers and even hanging baskets with these delightful flowers. Daffodils are easy to grow and require little maintenance. They come in many different shapes and colours that, with careful selection of varieties, can bloom for four months a year. The scientific name of the daffodil derives from the Greek god Narcissus, who looked into a pool, saw his reflection and fell in love with himself.

Because there are so many types of narcissus they have been divided into 13 groups, the nine most popular groups are listed below. Each narcissus is assigned to a group by having more or less the same floral characteristics. Some cultivars lend themselves to naturalising, while others are excellent grown in containers on the patio or planted in borders. By carefully selecting different cultivars, you can find narcissi to be in bloom from December to late April, depending on the climate of the garden. In addition, there is even a little-known narcissus that flowers during autumn.

These cultivars produce one flower per stem, and have big flowers that make the bold displays often seen in parks and public gardens.Excellent for cut flowers These varieties have flowers that will last a long time in water.

‘King Alfred’: one of the best-known cultivars of narcissus. Both trumpet and petals are a rich yellow. Height: 42cm (17in).

‘Mount Hood’: broad white petals and an ivory trumpet with its brim rolled back. The whole flower fades to pure white as it ages. An excellent mid-season cultivar, especially for containers. Height: 42cm (17in). The Royal Horticultural Society has given it its prestigious Award of Garden Merit (AGM).

‘Saint Keverne’: both trumpet and petals are a deep golden yellow. Excellent garden cultivar and resistant to basal rot (see Problem solver). Height: 42cm (17in). The Royal Horticultural Society has given it its prestigious Award of Garden Merit (AGM).

‘Tahiti’: a pretty double flower with overlapping petals interspersed in the middle with smaller petals of bright orange and red. Height: 42cm (17in). The Royal Horticultural Society has given it its prestigious Award of Garden Merit (AGM).

These are shorter in height than the border types, making them ideal for pots, window-boxes and hanging baskets.

‘Hawera’: this is a mid-season, flowered cultivar with a delicate lemon-yellow petals and trumpet – an excellent choice for containers. Height: 20cm (8in). The Royal Horticultural Society has given it its prestigious Award of Garden Merit (AGM).

‘Jetfire’: reflexed, oval, golden petals with a trumpet of rich dark tangerine. Height: 23cm (9in). The Royal Horticultural Society has given it its prestigious Award of Garden Merit (AGM).

‘Jack Snipe’: a popular cultivar. It has long, pointed petals and neat trumpets in dark yellow. Height: 23cm (9in). The Royal Horticultural Society has given it its prestigious Award of Garden Merit (AGM).

‘Quail’: a rich golden yellow cultivar with two to three flowers per stem. It produces late flowers, often when most narcissi have finished blooming. The blooms are scented, which makes this one an interesting addition to the patio. Height: 38cm (15in). The Royal Horticultural Society has given it its prestigious Award of Garden Merit (AGM).

These are very fragrant and often too tender to grow outside. The cultivars below have several flowers per stem.

‘Grand Soleil d’Or’: this cultivar is one of our earliest flowering narcissus, however, it is only half-hardy. Rich golden petals and a tangerine trumpet are produced several to a stem. It has a wonderful sweet scent, which makes this cultivar an excellent choice for growing on a windowsill. Height: 35cm

‘Minnow’: a hardy Tazetta narcissus that flowers from early- to mid-season. It has clusters of four or more fragrant, rounded flowers with creamy yellow petals and a lemon trumpet. Height: 18cm (7in). The Royal Horticultural Society has given it its prestigious Award of Garden Merit (AGM).

These comprise species narcissus that can be propagated true from seed.

Site and soil preferences: Hybrid daffodils, the ones most commonly planted, will grow almost anywhere, although they do prefer well-drained soils with a sunny or light shade environment. The species types are more specific in their requirements. Many come from mountainous regions and need excellent drainage.

Planting bulbs: Narcissus should be planted from August to November, the earlier the better, at a depth three times the height of the bulb in beds, borders and large containers. In lawns they are best planted slightly deeper, at a depth of 15cm (6in). If your soil is heavy and poorly drained, mix a handful of grit into the base of the planting hole. This will increase drainage, thus reducing the likelihood of fungal diseases.

To create a really good display in a container, plant bulbs at different depths to increase the number of bulbs that can be fitted into the space.

Planting associations: Narcissi look good planted in borders or in naturalised drifts at the base of deciduous trees. They look their best when planted in drifts of eight or more bulbs, which appears more natural. They also work well in containers with most other spring-flowering plants. Try them with tulips, crocuses , pansies, forget-me-nots, polyanthus or wallflowers. The smaller types of narcissus can look excellent in hanging baskets . Distribute them evenly throughout the basket as you position plants, such as polyanthus, heather, crocus or ivy.

Deadheading: When narcissi flower-heads have faded, it is best to remove them. Otherwise the plant will divert energy from building up the bulb, which is necessary for next year’s display, and put it into seed production. This job takes a little time if you have a large number of bulbs, but you will be rewarded by your efforts.

Care after flowering: After the blooms have faded, the remaining leaves can look unsightly as they yellow. It is important to resist the temptation of removing this foliage early. It contains valuable nutrients that will be used for next year’s crop of flowers. Leave the leaves for at least six weeks after flowering – longer if possible – before removing them.

Propagation: Divide overcrowded clumps in late summer, and plant offsets elsewhere in the garden.The species types can be propagated with fresh seed collected during summer and sown in late summer or autumn in pots outdoors. It will take several years for the plants to reach flowering size, but will be well worth the wait.

Create your own variety: It’s easy to cross-pollinate varieties and create your own. Species narcissus will reproduce true from seed while seeds from hybrids could result in flowers of variable quality. The plants will take two to three years to reach flowering size, but you will be rewarded with your very own cultivar which you can name.

No flowers: the most likely cause is the larvae of the narcissus bulb fly. It inhabits the daffodil bulb eating its way through the premature flower and storage tissue, substantially weakening the plant’s performance the following spring.

Another likely cause of lack of flowers is because of bulbs being planted too shallowly. Thus providing poor conditions for the plant to grow. The bulb will be prone to drying out during spring and is less likely to obtain sufficient nutrients to produce a good display of flowers. As a consequence, flowering is aborted. Prevent this from happening by planting the bulbs at least three times their height deep.

Pale brown spots on flowers and foliage: the fungal disease called ‘fire’ causes this problem and can seriously reduce the quality of your display. Control by removing the flowers as soon as symptoms appear or spray both flowers and foliage with a copper-based fungicide.

Conspicuous streaky foliage: is often the telltale signs of the plants infected by a virus. Sometimes the leaves can get distorted and a colour break of the flower occurs. The plant’s general vigour is often markedly reduced. The virus is spread by aphids and is incurable. The only remedy is to remove and then burn infected plants.

Dark brown lesions of leaf tips, malformed leaves: mainly occurs during wet seasons by a fungal disease called smoulder. In severe infections bulbs take on a pale appearance and break easily. Bulbs should be treated with a fungicide containing iprodione and planted in a different location.

Leaves wilting due to insect within the leaf: this is caused by an insect larva called the narcissus leaf miner, which burrows between the upper and lower surface of the leaf. This pest normally attacks leaves at soil level. Control by removing affected leaves with larvae. Premature yellowing of leaves and blistering on outer bulb scales: these symptoms are caused by nematodes. Treatment can be achieved by providing the bulbs with a hot water treatment. This involves immersing the bulbs into water at a temperature of 50ºC (122ºF) for 45 minutes, or 55ºC (131ºF) for 25 minutes. Bulbs should then be planted in a different location after treatment.

Stunted plants with distorted yellow leaves that usually die: caused by a disease known as basal rot that infects the bulb, eventually the bulb will rot. There is no treatment. Dig up diseased plants as soon as possible to reduce its spread. Some cultivars are more susceptible than others. The cultivar ‘Saint Keverne’ is resistant.