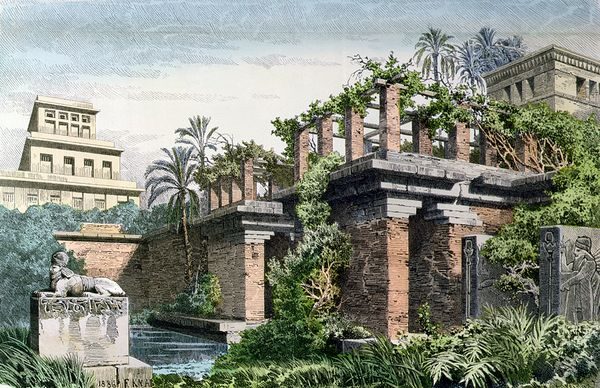 The Hanging Gardens of Babylon

Hanging Gardens of Babylon was described as “Planted with all sorts of trees, which both for greatness and beauty might delight the spectators.” 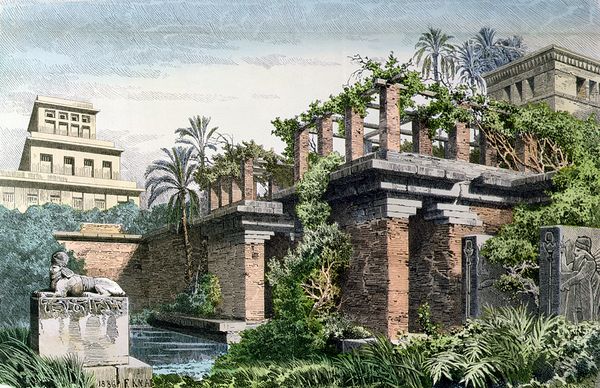 The Hanging Gardens of Babylon

Large trees, lush greenery, colorful flowers…in the middle of the dry, flat Mesopotamian landscape of Babylon? Greek historians attribute this amazing idea to Nebuchadnezzar II, who ruled >Babylon from 605-561 BCE. The ancient empire of Mesopotamia was located along the Tigris and Euphrates Rivers, in what is present-day Iraq. The Babylonian gardens were located in what is now Al-Hillah, about 50 miles southwest of Bagdad.

Historian Diodorus Siculus described the Hanging Gardens of Babylon as “Planted with all sorts of trees, which both for greatness and beauty might delight the spectators.” Siculus wrote the vast Library of World History, a chronology of the ancient world.

Nebuchadnezzar’s wife, Amytis, was the daughter of the King of Medes. According to belief, she was distressed over the flat, dry land of Babylon and greatly missed the greenery and mountains of her native Persia. Nebuchadnezzar decided to build an artificial mountain and populate it with trees, plants, flowers, and animals imported from all over the world in an effort to please his wife. Historians have described large gardens up to 400 feet wide, 400 feet long, and 80 feet high. According to descriptions, there were over-hanging terraces of brick, cube-shaped pillared planters containing trees, stairs climbing up through the levels, and a stone foundation.

The foundation was unusual in ancient Babylon. Most building were completed with bricks, but bricks broke apart when wet, so stone covered with asphalt and tile was used to form a more secure foundation for the gardens. It is believed that the gardens were watered via a chain pump; a device used to raise water from the Euphrates River to the highest levels of the garden, so it could flow down and water the lower levels.

A chain pump is comprised of two wheels connected by a chain with hanging buckets. The bottom wheel is in a pool of water; as the buckets pass through the pool they fill with water and are raised by the higher wheel. At the highest point, the buckets dump into a second pool, which irrigates the lower tiers through a series of channels and gates. The pump operates by a hand-turned shaft.

It is also possible the gardens were watered by an Archimedes screw, a large screw inside a hollow pipe which conducts water up its length. The Greek historian Strabo described it this way: “The ascent to the uppermost terrace-roofs is made by a stairway; and alongside these stairs there were screws, through which the water was continually conducted up into the garden from the Euphrates by those appointed for this purpose. “

The Hanging Gardens of Babylon was listed by Philo of Byzantium as one of the Seven Wonders of the Ancient World in a Hellenistic tour book circa 225 BCE, and later by Herodotus.

There is some question about whether the Hanging Gardens of Babylon actually existed. Despite descriptions by noted historians of the day, Nebuchadnezzar himself did not refer to the gardens. Some scholars believe they were actually the Gardens of Sennacherib at Nineveh.

Whether the gardens were located in Babylon or Nineveh, designed by Nebuchadnezzar or Sennacherib, it must have been an amazing sight to see a lush mountain rising out of the desert plain of Mesopotamia in ancient times.